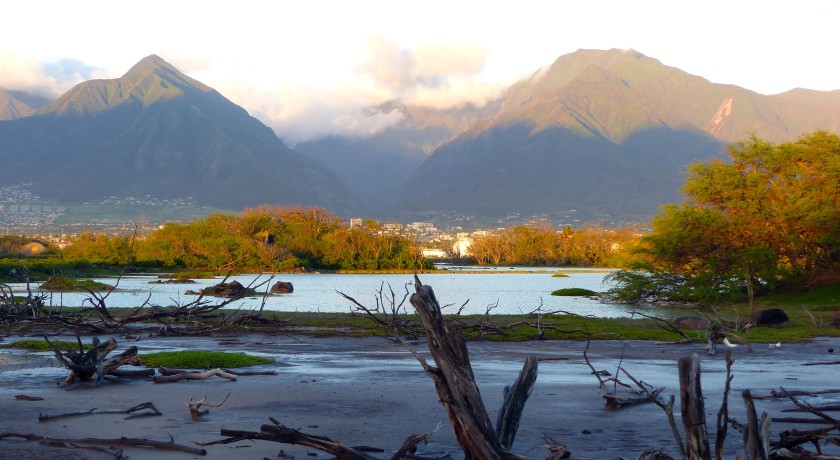 Oh -my title – sorry about that. Agatha Christie once joked that a writer who opened a story with the line “Hell!” said the Duchess couldn’t help but grab the attention of a reader. I’m hoping the title of this post will perform the same function. Happily, no snow is falling on Maui. No need to abort a vacation — or panic. Still, to me, the six young Snow Geese I saw at Kanaha Ponds seem almost as out of place as the white stuff.

I’m fascinated with rare birds and their stories. What freak wind or event sent these teenagers off into the vast Pacific? How did they find this remote island thousands of miles away from the Arctic sloughs where they hatched? How will they find their way back? It’s a work in progress, I suppose. For the time being, at least, their futures are linked, this little band of goose kids a long way from home. 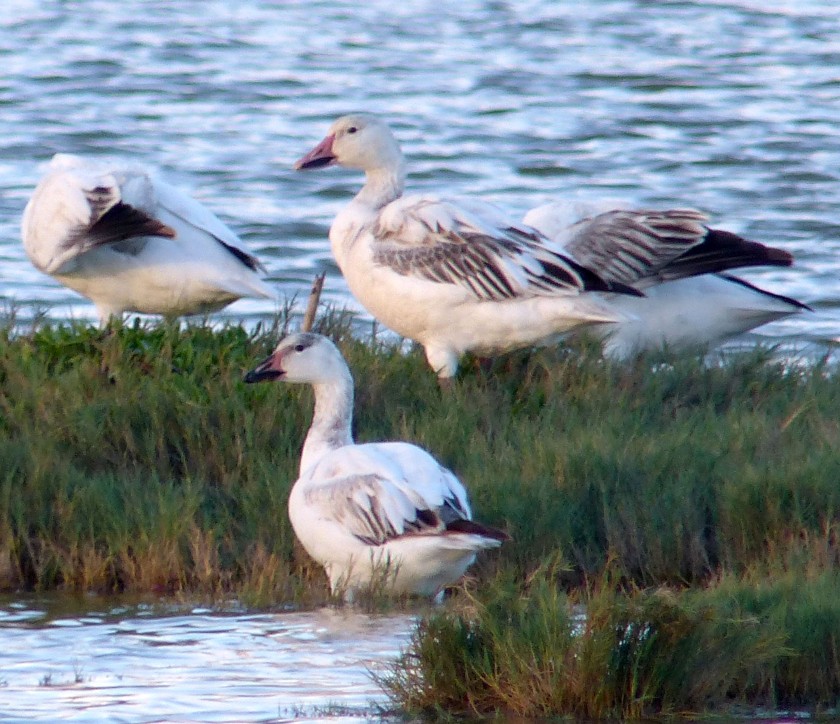 The Snow Geese rarities aren’t the only fascinating birds at Kanaha. NeNe Goose, a bird I’ve wanted to meet since I was a boy, nests here. Not terribly long ago, NeNes were one of the rarest birds in the world, only thirty individuals on their way to extinction, saved at the last minute by captive breeding and the heroic efforts of volunteers and governments. NeNe live from here at sea level to the cinder plains high up on Haleakala, the volcano that looms nearby. They’re quite tame and still need protection. Slim, fast, ferocious Mongooses are a particular threat, killing goslings and, I think, eating eggs. NeNe are still the rarest geese in the world, by the way. 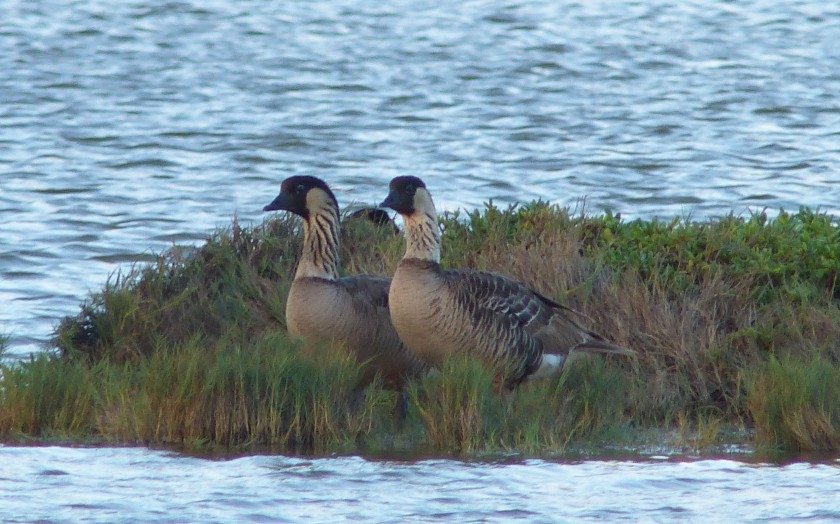 At home, I go to great lengths to try to see a Pacific Golden Plover, vainly searching every passing flock of Black-bellied Plovers for a bird without black armpits, a good identifier. Pacific Goldens are common here, seen on most lawns and boulevards. Now, in February, they are already forming pair bonds and defending territory. In a few months they’ll start for Alaska, a distance of almost five thousand kilometers, and they’ll do the flight in three days. Non-stop, sixty-five kilometers an hour! Then they’ll come back to exactly the same place in Maui in the fall. The birds I’m seeing here are truly home, on their special spots at Kanaha, on Maui. 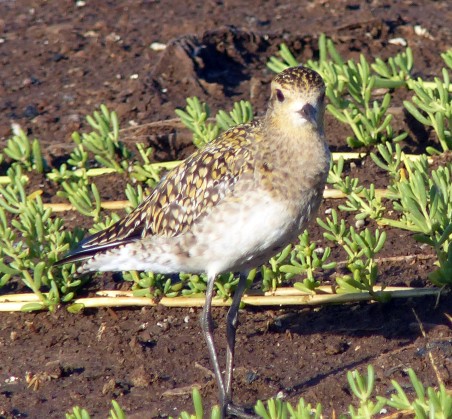 Wandering Tattlers also make the long journey from northwestern North America to Hawaii. I love that name! Hawaiians call them Ulili, after the sound of their call. Lovely too. Messenger birds. The Hawaiian singer Iz wrote a song about them. Two Ulili wander amongst the many noisy Black-necked Stilts who populate the shallows. There are Sanderling and a couple of Ruddy Turnstones here too. Nice. 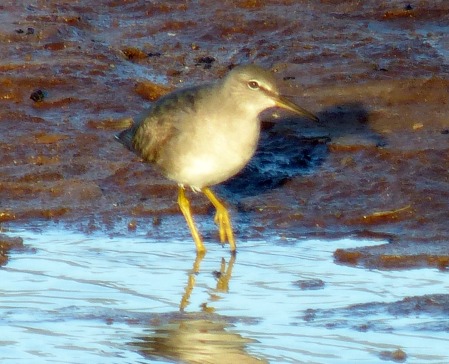 I’ve quickly grown fond of Kanaha Ponds but then I always like the solitude, and the life, of marshes, especially early in the day. This morning, the warm wind blows strong and the handsome Chestnut Munia which forage in small flocks use it to move quickly from place to place — and are consequently very hard to photograph. 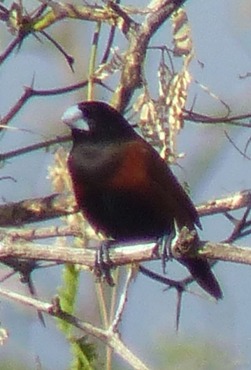 Both Northern and Red-crested Cardinals are more cooperative. Both species are active enough to indicate mating season is in progress, although the Northern Cardinal looks a bit shabby. Now I’m wondering – when is mating season here? Both Cardinals are introduced birds as are the Munia and others, like Common Mynahs. There are few native Hawaiian species at sea level now. Most have succumbed to mosquito borne diseases (mosquitoes are also not native to Hawaii). You have to go high up the mountain to find the beautiful, colourful honey creepers. I’ll do that soon. 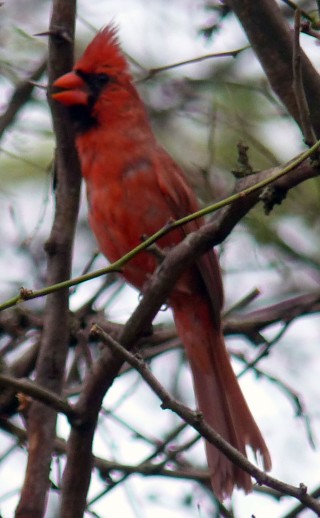 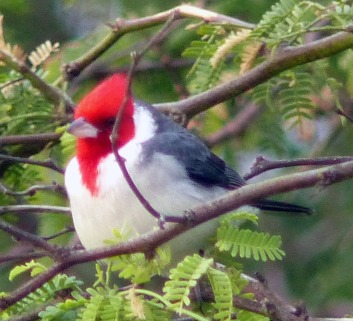 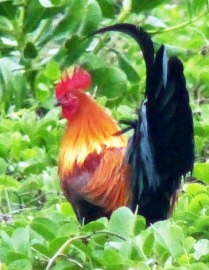 A few Red Junglefowl forage in amongst the low plants at the edges of the ponds. Junglefowl, the ancestors of chickens. Quite spectacular really — if you don’t think chicken.