Our mild January weather is kaput. February began with a seriously rainy day but now it’s gone cold and there’s snow in the forecast. A good time to look back on my favourite bird pictures. I’ll start with everybody’s favourite — owls. 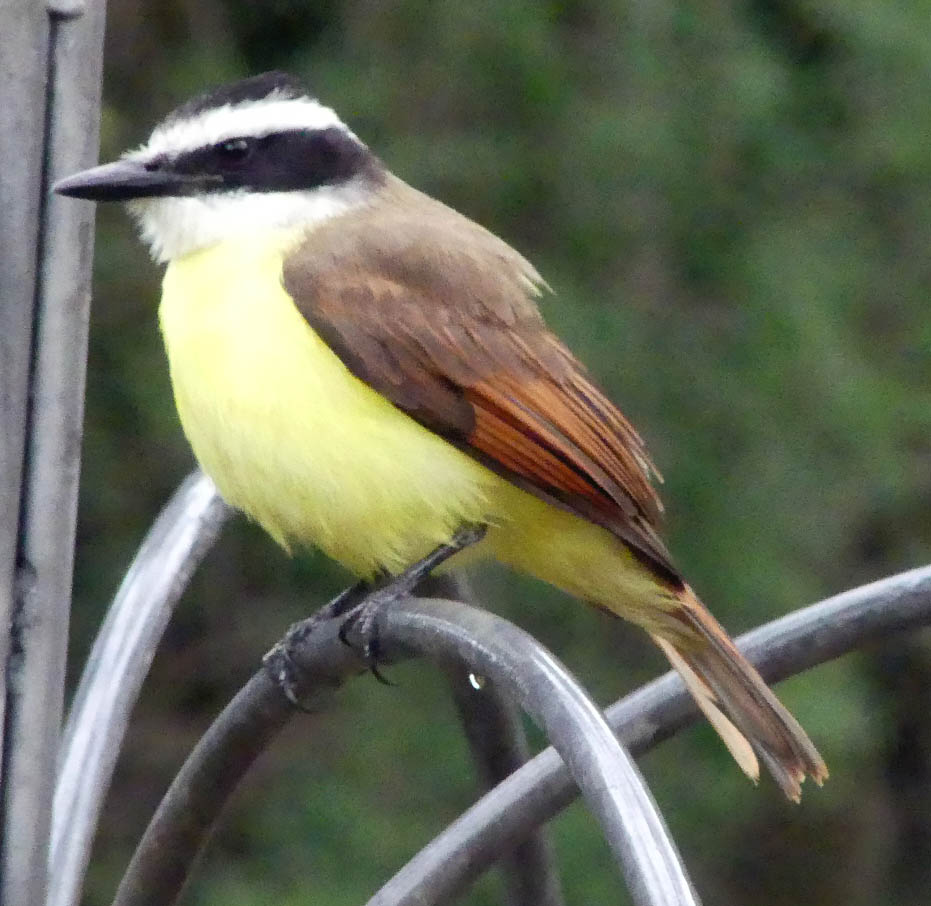 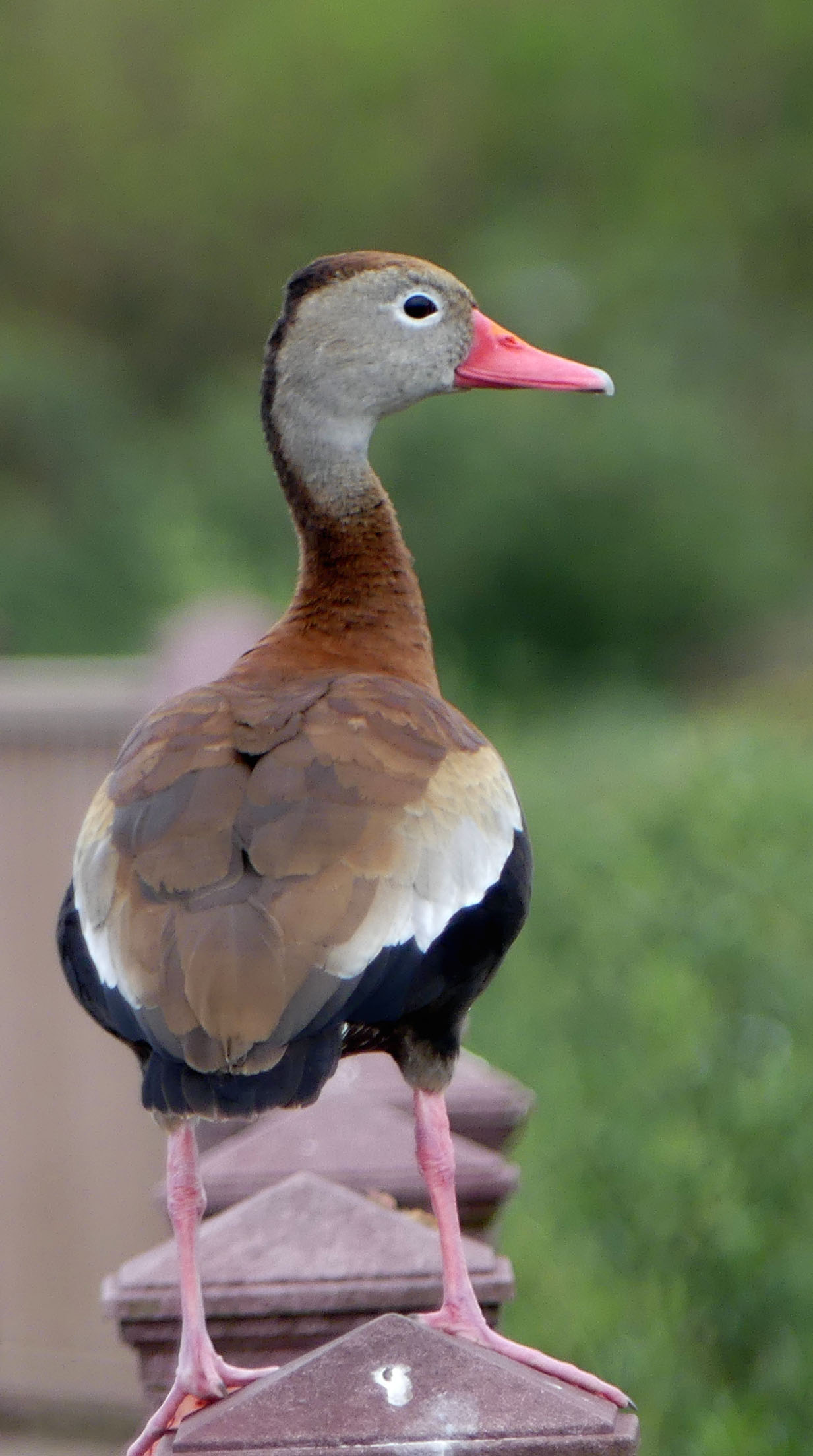 Normally I like to ramble on a bit, maybe even get philosophical. This time I think I’ll just stick to the photos, all of which I took when V and I were at the Rio Grande Birding Festival. Some great birds, including a Tamaulipas Crow, which was a life bird for me. Just like in the movie, The Big Year, we got it at the Brownsville Dump, even though Brownsville wasn’t part of the plan for the day. We just got lost and ended up there, like we were meant to see that small, rare, grackle-like crow. Isn’t birding fun? 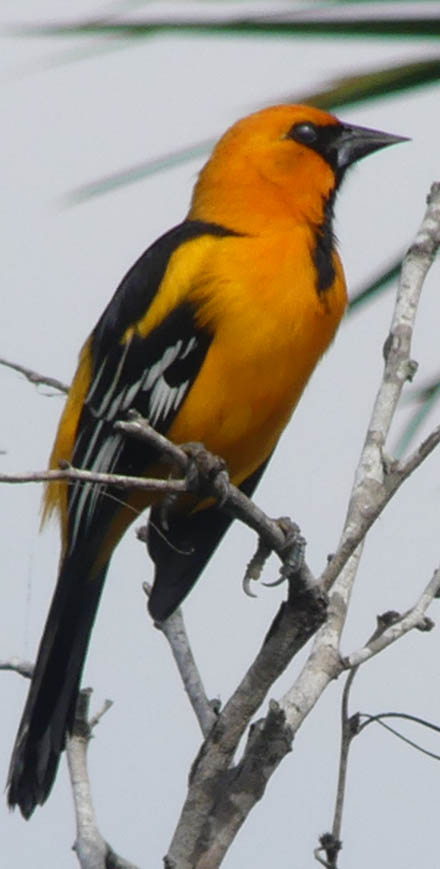 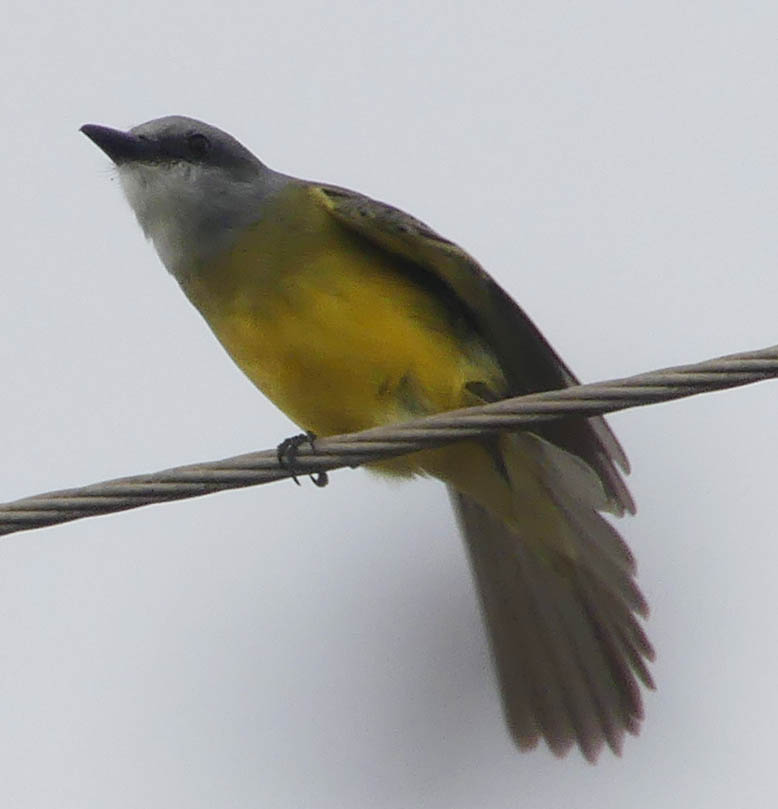 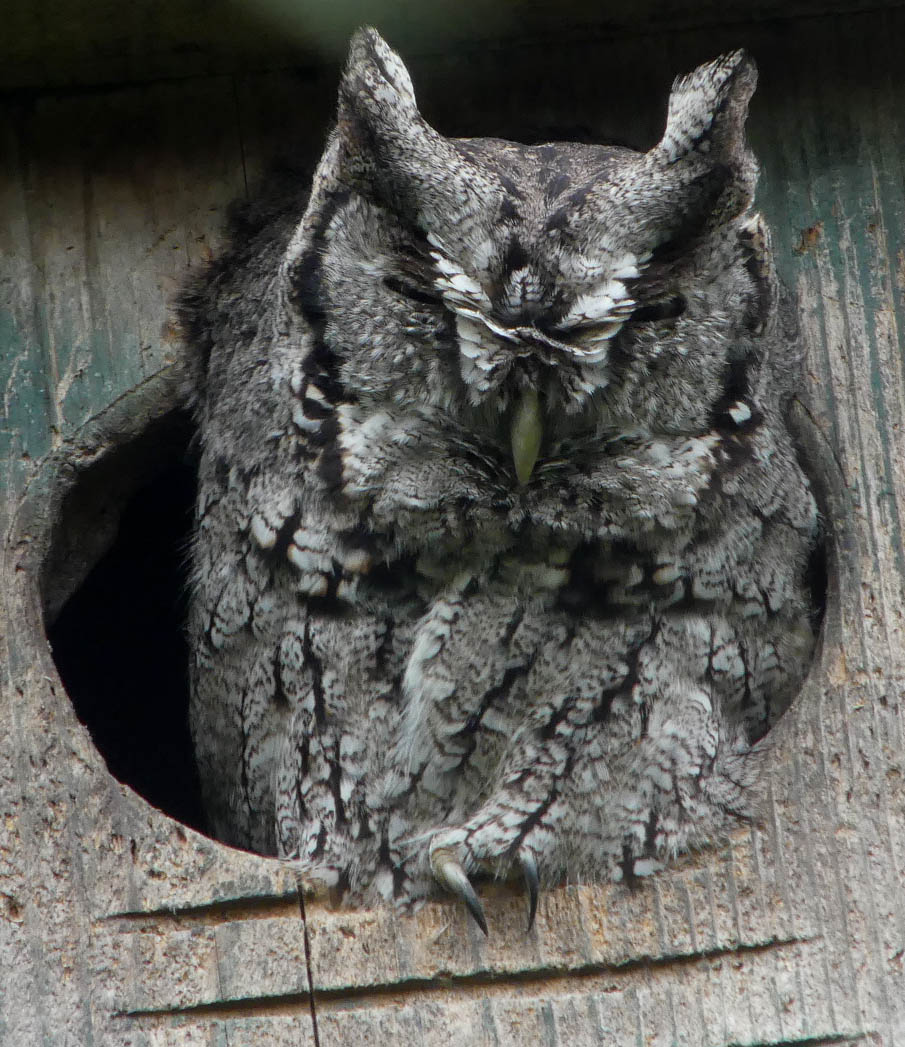 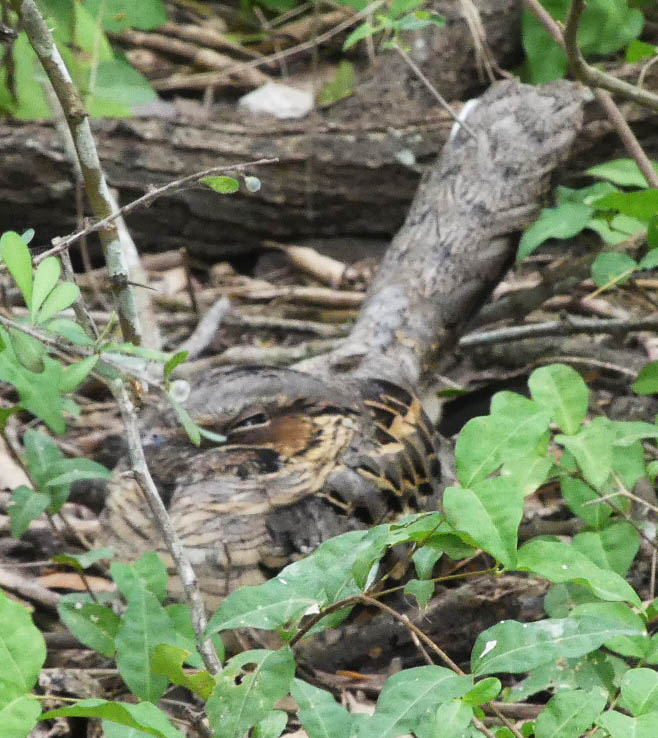 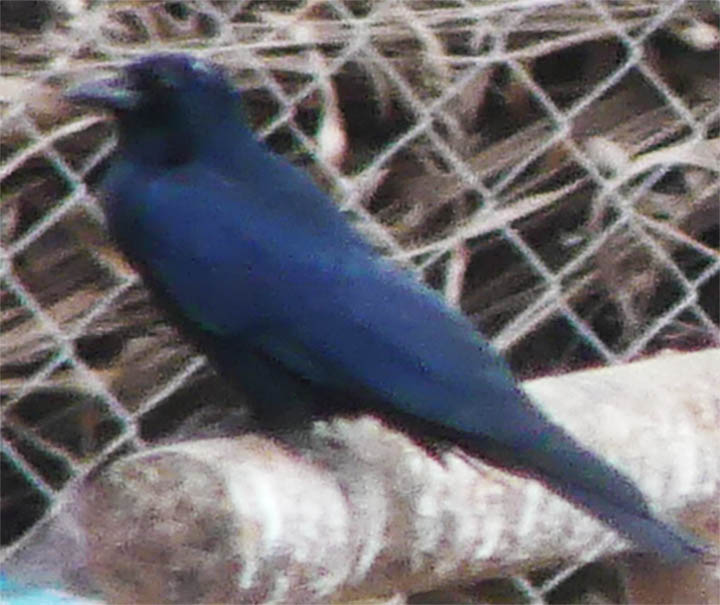 Tamaulipas Crow (from across the Brownsville dump)

After a month or so of searching the shrubbery for warblers and adding to my extensive collection of photos of blurred foliage and bare branches, the visit of a rare Western Kingbird to our area is a welcome relief. I had to search for it but when I found the bird, it wasn’t hiding. I really do appreciate flycatchers for not hiding. It’s a selling point. I’d tell them so if I could. Mind you, after the warblers, I’d say that about any bird that favoured an unobstructed perch and sat still for a picture. Getting a half decent shot of the Western sent me back into my files looking for other shots of flycatchers-phoebes, peewees, and kingbirds, tyrants all. A varied family too, with around 400 members around the world, of which these are just a few… 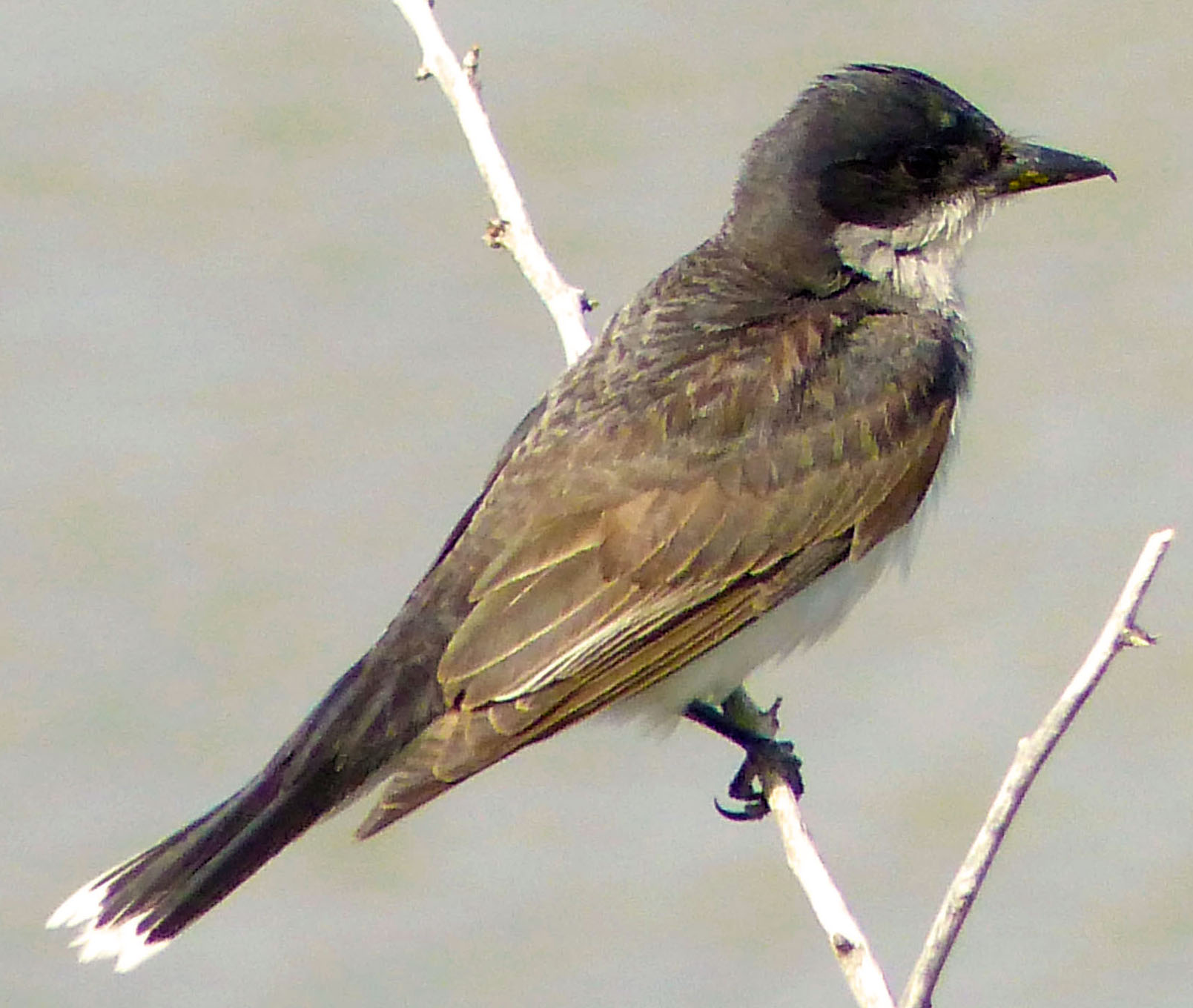 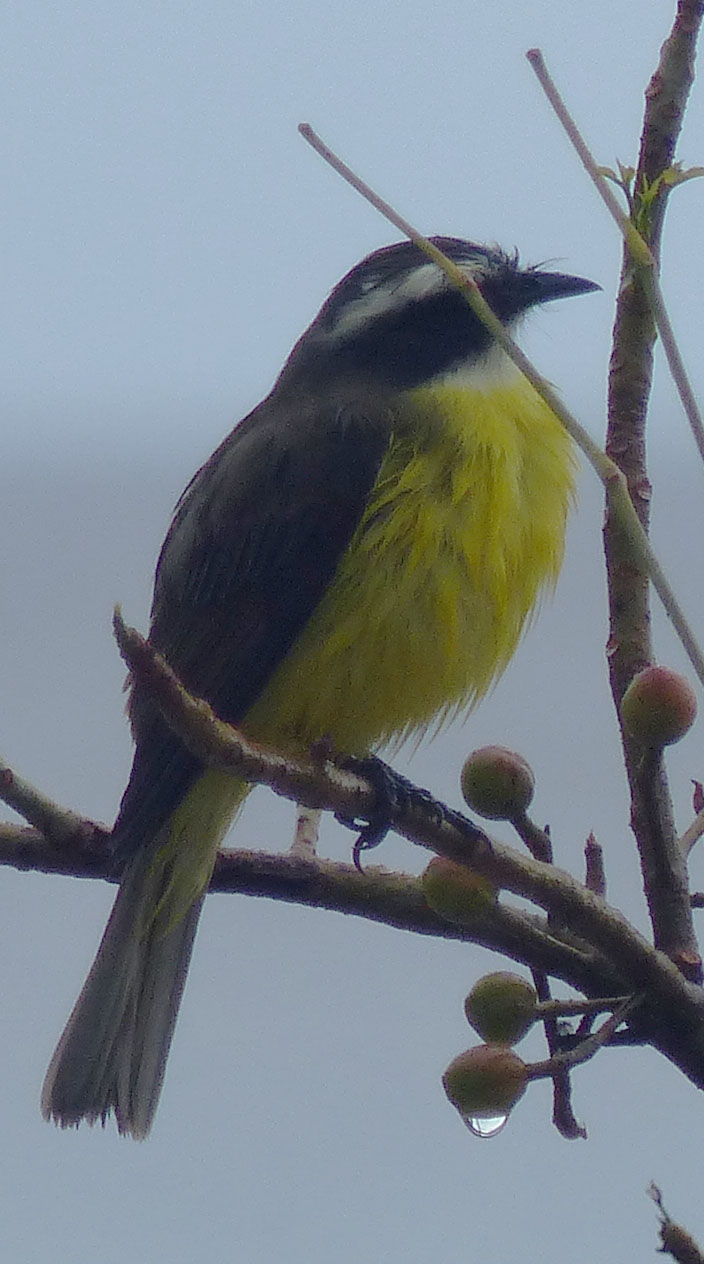 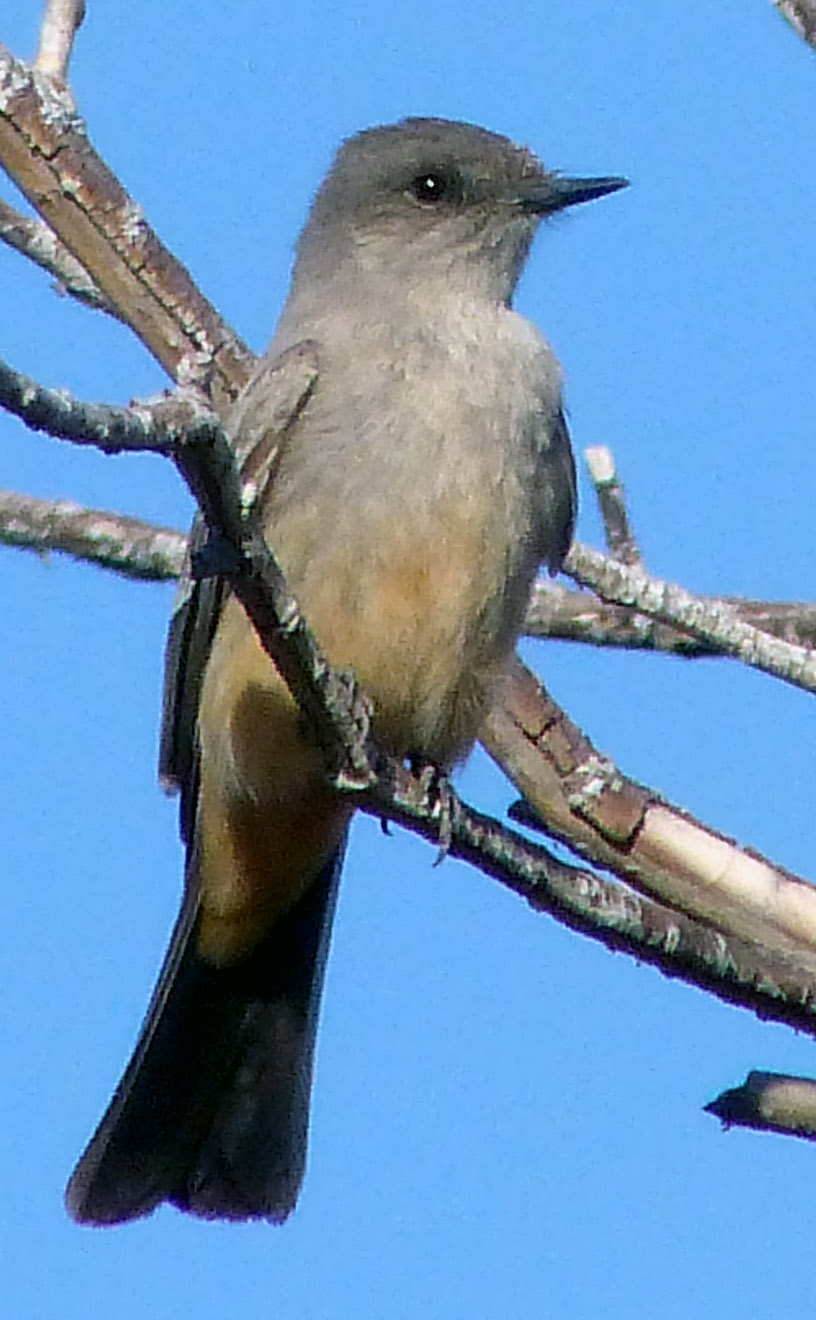 I visited Aransas National Wildlife Refuge in Texas in November of 2014 and saw Whooping Cranes for the first time. I subsequently wrote an article based on my visit – published in Hakai Magazine in 2015. I had hoped to see the birds last November when I was again at Aransas. Since I didn’t take a boat tour, which is the only sure way to view the birds, my expectations were low. Good job, because I saw not a single one of the 300 or so individuals parading about somewhere in these precious marshes – a reminder of how few Whoopers there are in the world. Still, Aransas is a wonderful place, with a variety of wildlife everywhere – Spoonbills, Ibis, Caracara, White-tailed Hawk, and much more. Lots and lots to see.

As for the cranes, not much has changed. It’s still a precarious existence for these magnificent birds. Loss of habitat at either end of the migration, or a catastrophic event en route, could eliminate the species. More environmental protection is needed, not less. My article, originally titled Whooping Cranes vs Big Oil follows.

I’m on a boat in Aransas National Wildlife Refuge in Texas viewing whooping cranes on their wintering grounds. They come for the blue crab that abounds in these muddy, cordgrass flats. Many forage in family groups—two white, red-capped adults and a fawn-coloured juvenile. True to their name, the “whoopers” are noisy, trumpeting and dancing to intimidate rivals or strengthen pair bonds. 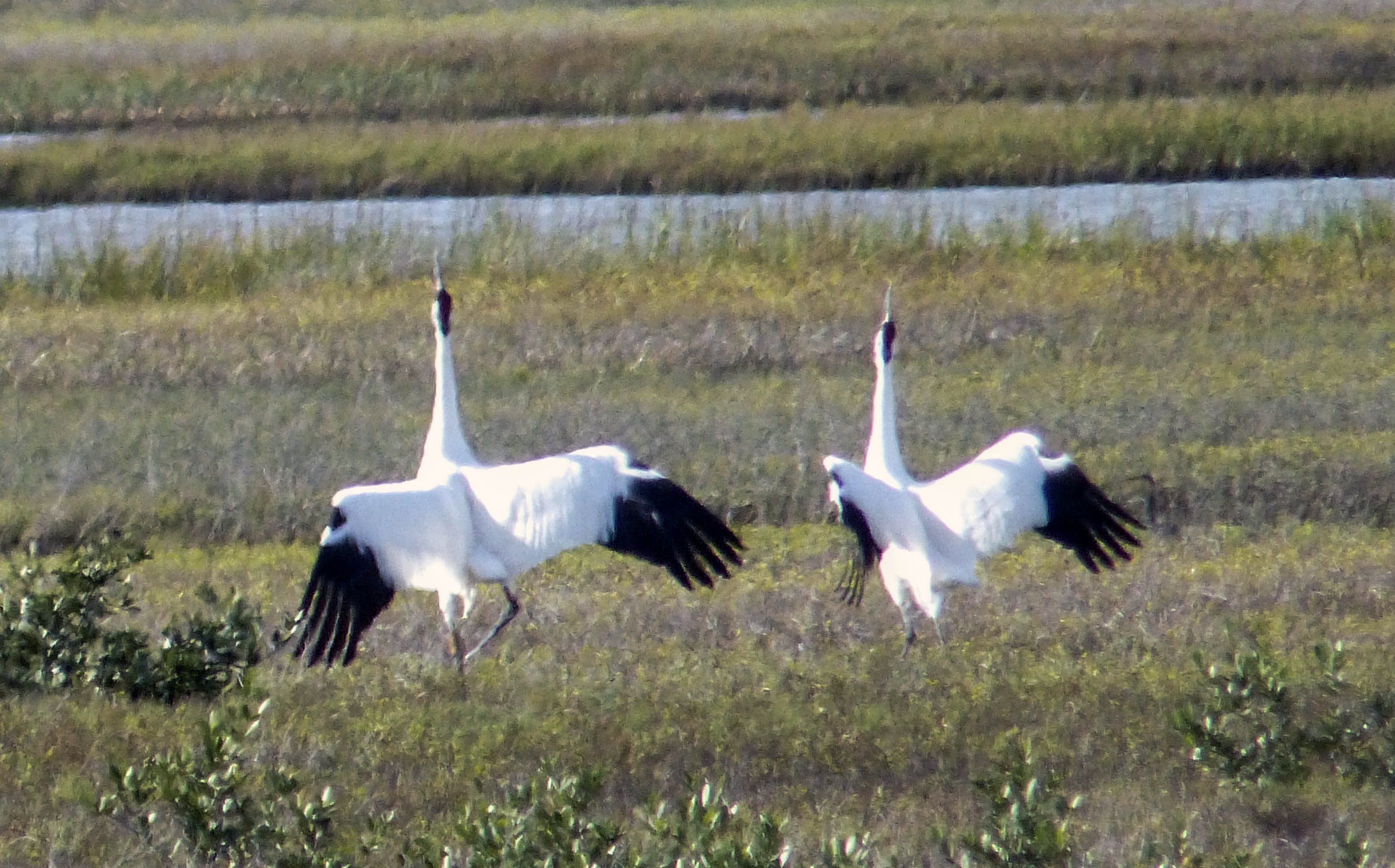 I’m delighted to see the birds at last. They belong to the Wood Buffalo/Aransas flock, numbering about 300—the entire free population of the tallest bird in North America. The dozen I’ll see today, on this side trip from Harlingen and the Rio Grande Valley Birding Festival, are my first, but I’ve followed their story since my boyhood in the 1960s. Then, fewer than 50 existed and their survival seemed doubtful.

Conserving the cranes is an ongoing challenge. They nest in remote Wood Buffalo National Park in Canada and winter in southern Texas—4,000 kilometers each way. Females lay two eggs but only one chick usually survives—the weaker is killed by its sibling or a predator. Ironically, the surplus chicks helped save the cranes. Scientists gathered and hatched “extra” eggs and slowly rebuilt the flock. The International Crane Foundation uses a variation of that method today in efforts to build a second flock. ICF volunteers dress as adult cranes to ensure chicks bond with other whoopers and use ultra-light aircraft to teach juveniles to fly. Crane conservation is about commitment and, I think, love.

At Aransas a barge carrying a Blowout Preventer Valve (BOP) passes a feeding crane family, temporarily blocking my view. BOPs seal underwater oil wells. Threat and threatened are instantly juxtaposed. Unlike the cranes, I know what happens when a BOP fails. When one blew on the Deep Water Horizon Well in 2010, escaping oil destroyed coastal marshes like Aransas from Louisiana to Florida. Another such spill could wipe out wild whooping cranes forever. Nor are the birds secure in Wood Buffalo—Alberta’s Oil Sands are just south of the nesting grounds.

I overnight in Corpus Christi near its brightly-lit petroleum refineries, and reflect on whooping cranes and Big Oil. In the darkened marshes, the birds likely watch for prowling bobcats and coyotes, their ancestral enemies, unaware of an omnipresent and vastly greater danger.

The woods around the visitor center at Laguna Atascosas in Texas. Like almost every other birder here, I’m looking for a Tropical Parula, a rare and pretty warbler that nobody’s seen today. I pass little knots of people scanning the trees with their binoculars. Soon we’re all on nodding terms.

It’s hot and too late in the day for birds to move around much, which means that the Parula (if it’s still here) will be hunkered down deep in the foliage. I still haven’t had breakfast and it seems silly to stick around. Then the amazing happens. A raucous group of Green Jays push out an Eastern Screech Owl. The bird stops for pictures about ten feet away! The chances of this are remote but when it happens it’s wonderful, like finding treasure. It’s one of the things I love about birding. 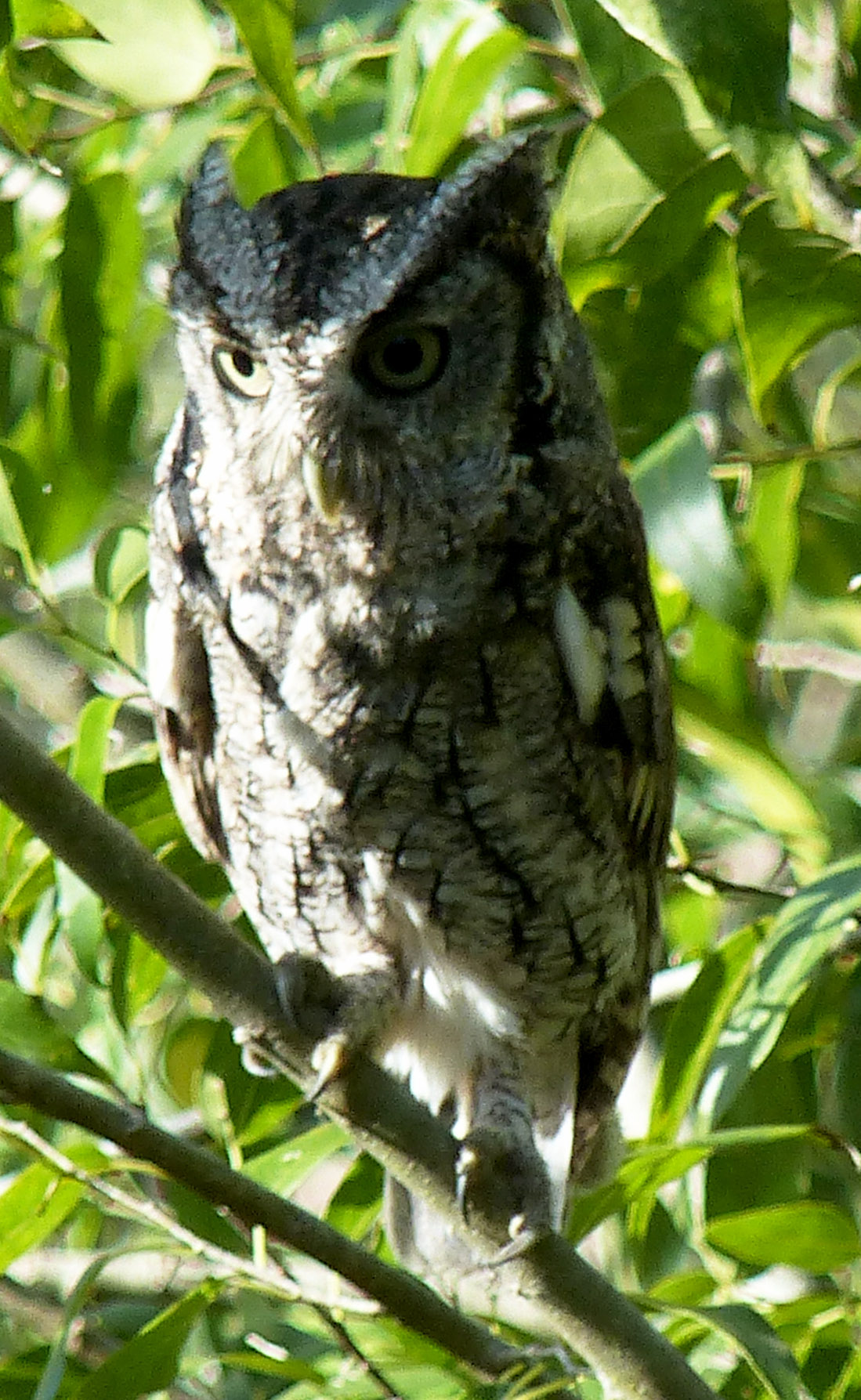 I’m at a birding festival in Texas. It’s unseasonably hot and very humid. My destination is the Laguna Atascosas Wildlife Refuge where I’m hoping to see rare Aplomado Falcons. The day doesn’t start well. I’m up early and keen but my GPS takes me to a bridge that is out and poorly marked detours have me driving around in circles for three hours. Twenty miles of so in three hours! I finally luck out and spot the road in, which turns to be one of the worst thoroughfares I’ve ever been on. I do see a gorgeous White-tailed Hawk but then nothing. 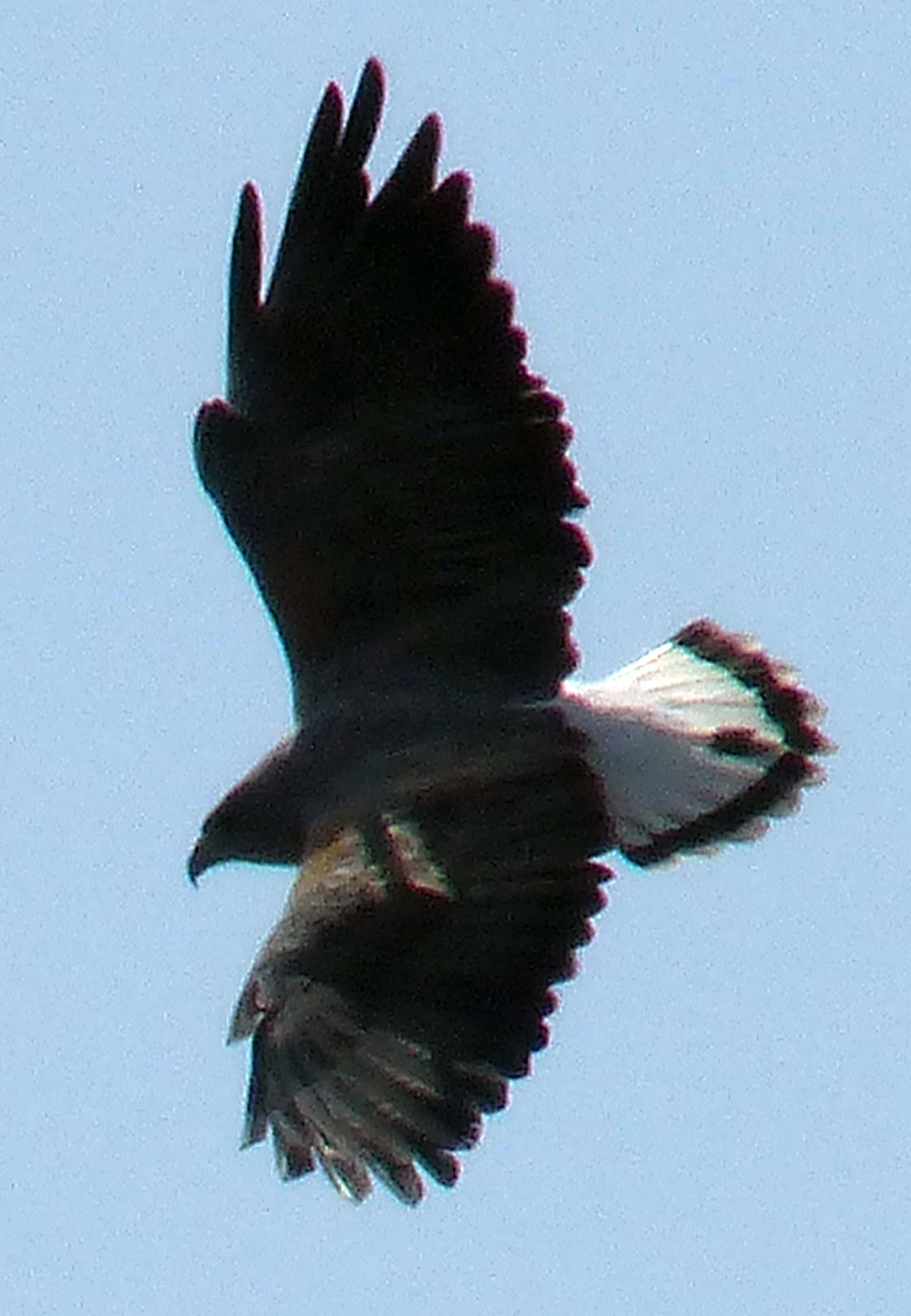 I’m getting discouraged but then, wonder of wonders, I spot two Aplomados and brake. They’re on adjacent fence posts about thirty feet away – beautiful- but when I get out to take pictures, my lens fogs up – something about air conditioners, humidity, and glass. Physics again, my nemesis!

I finally clear things up but as I try to line up a shot, the falcons, disgusted, hightail it. It’s not my day. Or is it? Birding is funny. After I resign myself to failure, my luck changes. The day becomes a raptor day – and one of the my best. I see a dozen birds of prey – the Aplomados, Peregrine Falcons, White-tailed Kites, Kestrels, Harriers, Crested Caracaras, White-tailed Hawks and the highlight, an Eastern Screech Owl. I’ll talk about that marvellous bird in the next post.

For those who don’t know the Aplomado, I offer a picture of a bird rehabilitated by the Raptor Project, an organization that looks after injured birds who are too damaged to be released. You can see what I missed when my lens fogged up back at Atascosas! The wild birds looked angular and deadly, not the least bit cute like this chap. 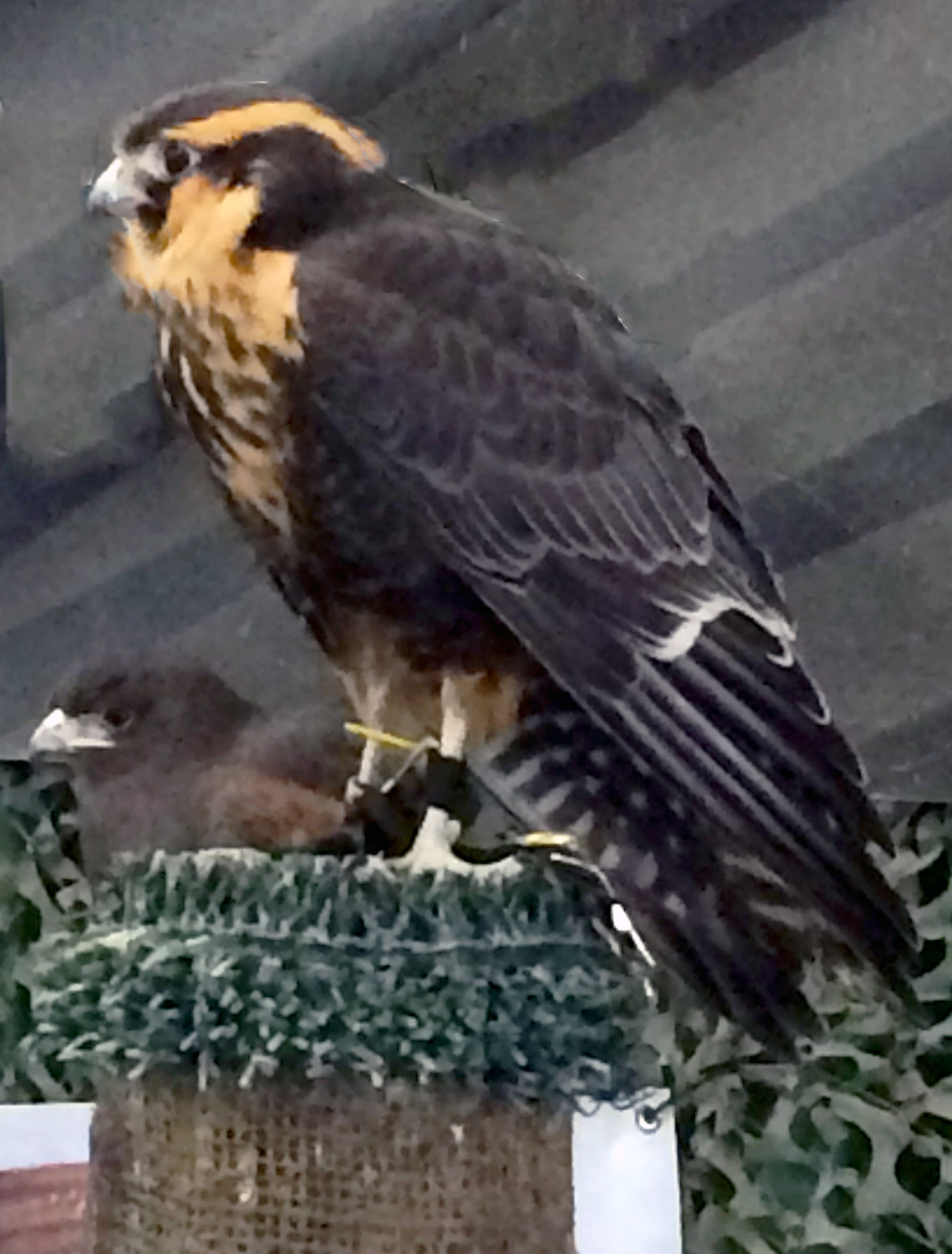