I’m hoping for a Great Horned Owl this morning. I know several live in Beacon Hill Park but I’ll be darned if I can find them. Pity I’m not looking for Mallards, which are here in abundance. How long has it been since they made the Rare Bird list? A Eurasian Widgeon is grazing near one of the artificial channels and the American Black Duck that has wintered at Fountain Lake for the past few years is still around. A couple of female Hooded Mergansers cruise past, fishing for Pumpkinseeds, I guess. Nice birds but familiar.

It’s very still. There are few people around and I’m focussed on the trees looking in vain for owl shapes, my mind wandering. I suddenly remember the Hippopotamus poem by Patrick Barrington and it sticks, hard. I can remember some but not all. “I had a hippopotamus, I kept him in a shed; I fed him up on vitamins and vegetable bread...”  After that, there was a hippo “portrait done by a celebrity in chalks.” Oh, dear.

The guy’s landlady does the hippo in with a machine gun she borrows from “her soldier nephew Percy “- I’m sure of that. So sad. But what’s the rest? I’m really concentrating now, so much so that a horrific gurgling yawk! startles me — someone’s being strangled and shockingly close by too! It’s not that, of course, although it takes me a fraction of a second to realize this. A big ungainly bird flaps and climbs upwards through the dark branches of the cedar I’m under, and then another – Great Blue Herons on the move. It’s mating season and nests are being built. This will be the new heronry. I definitely do not want to be standing beneath a heronry and take my leave. When I finally get a view of the treetops, I see something for the first time – male Herons raising their crests. Wonderful. Even the quietest birding days offer us something marvellous.

“No longer now he gambols in the orchard in the spring; no longer do I lead him through the village on a string.

No longer in the mornings does the neighbourhood rejoice; to his hippopotamusically-modulated voice.”

And then it gets sadder.

The last time I visited Swan Lake a week or two ago, most of its remaining  waterfowl clustered around a small lead of open water, some swimming, others skating comically around the perimeter. Now the Lake is open and busy. Ring-necked Ducks and Canada Geese are here. Fleets of Common Mergansers fish, diving in unison. A squadron of sleepy Ruddy Ducks passes, stiff tails held at the traditional forty-five degree angle; the birds move together, either pushed by the breeze or through some coordinated, semi-conscious and unseen paddling.

Half-concealed in the rushes, a Blue Heron watches from the rushes, alert to something. There it is — a Bald Eagle. It comes in over the lake like a warplane, hidden at first behind a screen of firs and then dropping down to settle into a stealthy glide. The target is a mixed flock of Glaucous-winged and Thayer’s Gulls but the lookouts are on the ball this time and the intended victims disperse in a hurry. The Eagle, looking slightly irritated, makes a half-hearted stoop and then is gone. 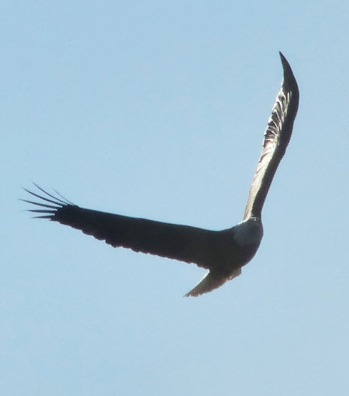 The breeze is suddenly quite cold so I leave the lakeside and take one of my favourite owling paths where it’s more sheltered. No owls today unfortunately. A pair of Steller’s Jays makes it clear I’m not welcome and sends me on my way with a series of raspy calls. It’s mating season preliminary time; male Red-winged Blackbirds are also starting to sing, although singing might not be the right word to describe their familiar, spring-heralding call. 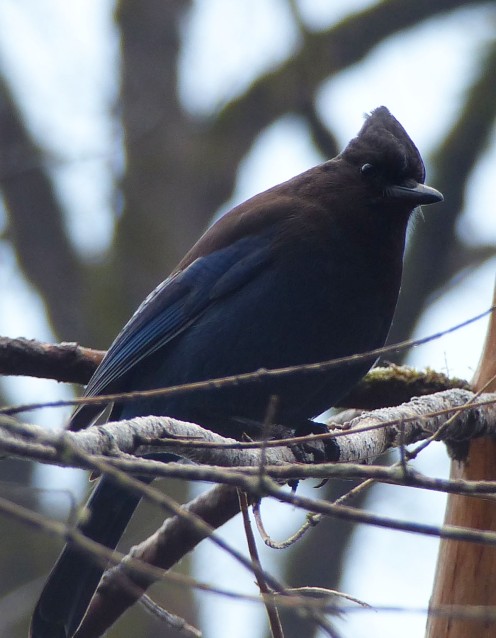 Out in the sunlight again, I’m startled by a very loud ‘peep’ and then another, which I realize is the sound made by the extended tail feathers of an Anna’s Hummingbird at the bottom of its courtship dive. A moment of two later, the bird alights close by and gives me the ‘hairy eyeball’, its purple gorget extended and catching the sun.