I’ve been to the sewage ponds again searching for a Glaucous Gull that’s supposed to be there and, once again, it’s not. Sewage ponds, for crying out loud! I know I keep harping on about Glaucous Gulls. This is the last time — I give up. Plus I’m starting to think the reference picture a rival birder gave me is throwing me off.

On the other hand, I did view two Pink-footed Geese at Martindale Flats. These birds summer in Greenland and I never expected to see them on our coast — or anywhere. I think they arrived on one of the fierce Nor’easters that recently plagued us but who knows. The geese stayed with a flock of Canada and Cackling Geese. Geese are sociable that way — accommodating. They never did come close enough for me to get good pictures but then you can’t have everything. They also attracted a flock of birders including some who had come long distances just to be able to record these rare birds – and to get their own lousy shots.

I needed to go to Washington state to pick up copies of my latest mystery novel, the Bent Box, and figured I might as well also pick up a few birds while I’m down there. There’s been a female Common Eider hanging out at a place I’ve never heard of called Purdy Spit near Gig Harbor. The Eider is a rare, rare bird on the west coast so, what the heck, I’ll go have a look. And since I’m going that far, I plan to visit some of my favourite places in Oregon, like Baskett Slough and the Finley Reserve. Weather is a problem though. It’s still unseasonably cold and snow is a possibility.

I take a side trip to Samish Flats and spot at least a dozen Red-tailed Hawks, tons of Trumpeter Swans, some Great Blue Herons, scores of Bald Eagles, ducks by the hundreds and a Rough-legged Hawk or two. At Tacoma, I turn towards Gig Harbor and Purdy Spit. When I’m a few miles from my destination, my GPS capriciously decides I’m an hour and a half away. Foiled. I turn back. Who cares about a stupid rare bird anyway? I pay the bridge toll and continue to Nisqually. Nisqually’s nice but the wind is cutting. And it’s damp too. After an hour of birding there, I’m chilled to the bone. When I get to the motel, my fingers are still numb.

I’m booked into a cheap highway motel in Centralia figuring that I can go south or west from there the next morning. I know nothing about Centralia except what I’ve seen from the highway, which hasn’t been all that impressive. Off the highway, however, Centralia is quite nice. It’s one of the things I really like out these birding trips, the chance to explore, to discover places I would never have seen otherwise. It gets better. I luck into McMenamin’s Olympic Club – a pleasant surprise!

With its built-in movie theater and a huge wood-burning stove, the Olympic Club is a treasure. The smell of the fire, the warmth, the food, the glass of Hammerhead Ale, well, on a cold night who could ask for more. Wyatt Earp or Wild Bill Hickok would feel right at home here. 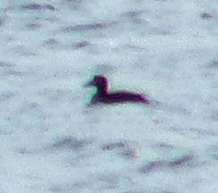 Next morning I hear Portland and the coast are expecting a big dump of snow so I turn back north. I decide to have one last stab at the Eider. When I get to Purdy Spit, which turns out to be ten minutes away from where I was yesterday, I find some birders already scoping the water. They’re kind enough to point out the duck to me, which is good because it’s a mile away on the other side of the bay. I can see it with my scope but I’m just shooting blind with my camera. Luckily I got a few pictures but nothing I’d submit to Audubon.

I’ve booked a motel in Bellingham. It’s just a few hours away so I’ve got time to bird some more. I follow up on reports of Bohemian Waxwings in Magnuson Park in Seattle. Happily they’re easy to find (with help from another birder already viewing them). I know these attractive birds quite well from my years living in northern BC and I’m surprised I never added them to my life list before. Now I do. Before I get to Bellingham, I head back down to Samish Flats. It’ll be dark soon and the Short-eared Owls that winter there should be hunting.

Sure enough I spot one – a beautiful bird, one of the most prettiest owls, I think. Unfortunately, the light’s too low and the bird moving around too much to get a good shot. For this post, I’ll use a stand-in, a bird I photographed last year. But I’m frozen again. I don’t think I’ve been really warm since I sat by the Olympic Club’s towering wood stove last night and ate my dinner. I know – whine, whine, whine. If it wasn’t for that fantastic view and the wonderful birds, well…

After yet another fruitless search for a Glaucous Gull, this time at Esquimalt Lagoon, I stop at Swan Lake in hopes of spotting an owl. I’d like to get something for day, other than chilblains. On the subject of Glaucous Gulls — for some reason this species continues to elude me. I see reports of sightings from the location I’ve just checked (both before and after) but I keep missing out. I think it’s one of those ‘if you see a lineup at the whatever with me in it, you’d be smart to pick another line‘ kind of things. Never mind, I’ll keep trying.

Back to owls. I get lucky. I know where Barred Owls hang out sometimes and sure enough, there’s a bird waiting for me – a lovely, dozing owl in clear view. So there, Glaucous Gull!

Dozens of people pass by on a path not twenty feet away, completely unaware that this gem is so close. Like many birders, I prefer not to point out owls to passersby. It’s not selfishness. More activity, more photographers, more everything, will disturb the resting bird and may drive it away. Owls fascinate us but they do need their downtime. Their survival depends on it. This one gives me a few good photos. Then it closes its eyes and goes to sleep. Thank you, Barred Owl.

A cold Northeaster blew up a couple of days ago and its still moaning through the shrouds of the sailboats moored across the bay. Last night, the howling outside the window reminded me of a passage in Moonlight, one of my favourite childhood books.

“The sea has little mercy…people turn in their beds and thank God they are not fighting with the sea on Moonfleet Beach.”

Or something like that. Anyway, I was happy not to be fighting the sea anywhere around here.

When the sun comes up, we learn what the wind can do — a sailboat pushed up on the reef where I usually spot Greater Yellowlegs and Black-bellied Plovers. Beyond the San Juans, Mount Baker stands sharp and clear against a robin’s egg sky but the sea is white-capped and the breakwater regularly washed with torrents of seawater. I’m not feeling rugged enough to go scope for seabirds. Time to go inland.

We head out to Martindale Flats in the vain hope that going to an area of flatlands northeast of here will get us out of a nor’easter. Fat chance. However, a number of rare and rarish birds have been sighted in the fields recently — a Clay-colored Sparrow (maybe 2), a Harris’s Sparrow,  and a Harlan’s Hawk, and I want those birds.

It’s just as windy at Martindale as it is in town, maybe more so, but there are birds everywhere, using the wind. It’s what they do. A Merlin zooms by before we can park, and moments later, a Peregrine, both too fast to photograph. The Peregrine means nothing to flocks of Canada and Cackling Geese, nor to the mighty Trumpeter Swans. It’s the Widgeon who panic; hundreds take to the air, wing-patches and bellies flashing white in the bright sunlight. 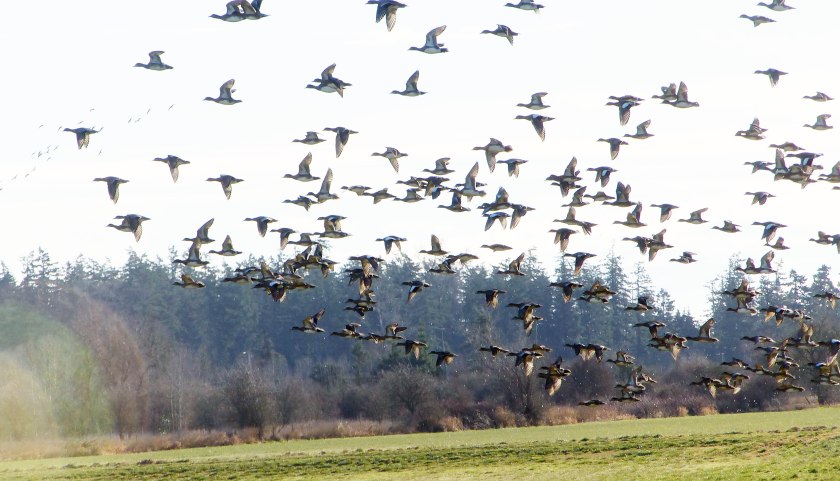 And there are a dozen or so Bald Eagles, one of which is feeding on a kill (either a Raven or a Turkey Vulture). On the other side of the road, a pair sit close, bonded, nesting in a month or so perhaps. 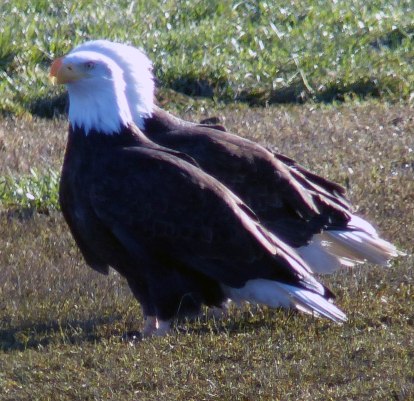 We catch glimpses of the Harlan’s Hawk and the Clay-colored Sparrow but the Harris’s Sparrow eludes us. The wind is bone-chilling but it brought an unexpected visitor – a Snow Bunting. Beautiful and very cooperative. And then later, at a feeder, a Dark-eyed Junco speckled with white, a condition ornithologists call leucistic.

It’s getting on and we’re frozen. The Harris’s Sparrow will have to wait for another day. One of us spoke the words ‘coffee shop’ and that was that. Time to hurry to the car and exit ‘stage left’.