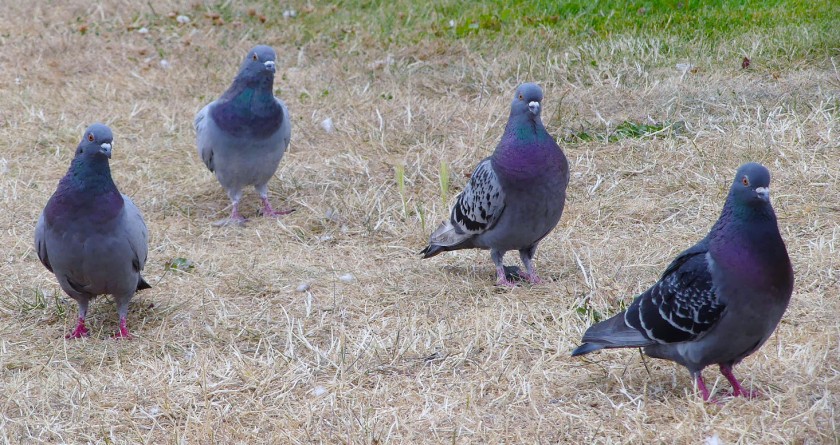 It’s a measure, perhaps, of how slow mid-summer birding has been for me that I offer up this post on pigeons. I don’t mean the sleek, pearl-grey Band-tailed Pigeons, those lovely forest birds, but ordinary Rock Doves. Not well liked generally, these ‘rats of the air’, but I’ve always had a fondness for them.

I won’t bore you with stories of boyhood attempts to become a ‘pigeon fancier’, or of nabbing sleeping birds from under the eaves of the abandoned, towering old Coop with its rotten floors, or of the strange assortment of culled birds begged from real pigeon people, or of the beautiful red Homer, with its mighty chest and prominent cere, the one my friend Lloyd and I grabbed from off a downtown sidewalk. Gosh, that bird was something – a prince among pigeons. He stayed with us for a few days, ate our gleaned scratch grain, gathered his strength and then continued his journey home-at ninety miles an hour if he wanted to kick in the afterburners. Where home was, Lloyd and I never knew. We ought to have recorded his band number but twelve-year-olds often don’t think of these things until it’s too late.

To make this more like a birding post, I mount a photographic expedition in support of it. I soon discover that there are really good-looking birds in most flocks. When I park out on Turkey Head, the locals descend, ready for a handout. They obviously don’t understand I’m here to do a photo essay, because I have to keep chasing them off the hood of my newly-washed car. It’s very disrespectful (Hey- I’m working here!).

Begging for handouts, incidentally, doesn’t interrupt the mating process with Rock Doves. I’m not sure anything less than a Peregrine Falcon attack would accomplish that. The cooing and billing goes on through the year, which is why there are so many of these feathered ‘rats’ around the world. It’s not their fault. I watch a movie star among Rock Doves as he pouts his way from one female to another until he finally gets his way. He’s got it all going on! 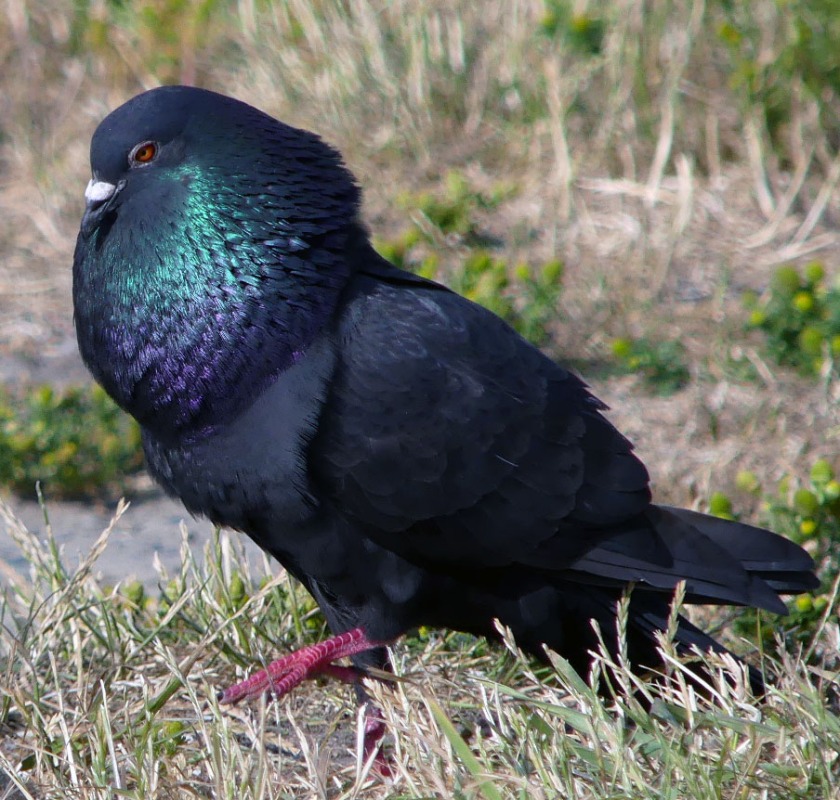 When a more promising car drives by, the flock lifts off, whirls around, performs some aerial acrobatics and, disappointed, re-descends near me. Pigeons are beautiful flyers, agile and swift, with those wing-tip clapping takeoffs. It’s worth watching pigeons fly; there aren’t many birds who do it better. See how they soar and turn, tumble and dive, flight feathers whistling. Wonderful! It’s those big chest muscles and the area and shape of the wing that does it.

They’re relatively good parents too, think ‘pigeon milk’. In the bird world, only Penguins and Flamingos and members of the dove family make ‘milk’ for their offspring. I’ve never lost my love for these birds. Most of the snarky things people say about them could also be said about our own species, which doesn’t mean there’s no such thing as too many pigeons.

So that’s it for the Rock Dove, my old pals. Nostalgia still drives me to visit to poultry barns at fall fairs, to check out Pouters, Fantails, Rollers and Tumblers at local shows, to listen to the music of  squawks, coos and peeps and the rustle of feathers, to breathe in the once familiar smells of scratch grain and straw. Other bird smells I try to ignore. I’m selective with with nostalgia. One has to be.