Mid summer is the hinge in the birding year. The spring migration is long past and the fall migration has yet to begin, although a few birds do start south now. It’s hot. Foliage is thick. Birds are hard to spot and most aren’t singing. Nesting season is over and most nestlings have fledged and on their own. No guidance from mom and dad now. With almost zero experience, they’re out bumbling around trying to survive. 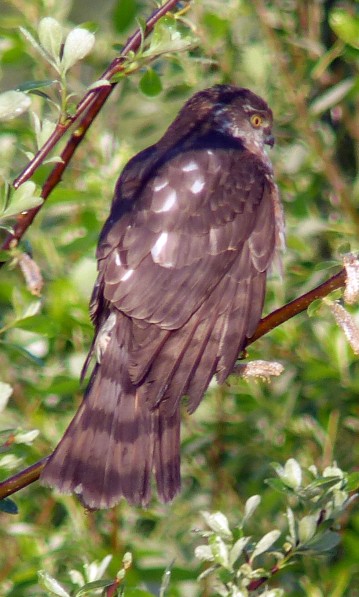 The young Sharp-shinned Hawk is a case in point. He doesn’t know what he’s doing. Sharpies are accipters, bird hawks, like their cousins the Cooper’s Hawk. Designed to fly at speed through the foliage, they have short broad wings and long tail. If you’re a songbird, these are the guys you fret about. And it’s not enough to find a twig and hunker down, protected by branches from attacks from above. I’ve seen accipters climb up almost monkey-like among the tree branches. Sparrow – be afraid, be very afraid!

My young hawk is, however, comically inept. Diving into bushes right, left and center, he’s killed nothing. People are walking past him not five feet away. He doesn’t notice. He’s intent on catching a meal. He needs focus. Unfortunately, each attempt sends birds zooming in all directions like playing cards tossed away by a magician. Not only don’t they seem worried, it’s almost like they’re laughing at the newest murderer on the block. They don’t go very far. The Robin sits on a wire twenty feet away; two sparrows preen on a branch in a neighbouring tree. Worse still, the Rock Doves, AKA pigeons, drop down to pick up crumbs from the road.  Finally, the young hawk flies away, crestfallen. I’m on my way to a rowing lesson, so no camera. Hence the body-double!

We find very few dead juvenile Sharpies and mine will no doubt find success soon. He’s not the only juvenile no longer protected by his parents. Plenty of inexperienced recently fledged songbirds are making their debuts. It’s what the natural world is all about really – life, death, survival, which is probably why this Spotted Towhee looks so worried.

So, laugh while you can songbirds. With each failure, the young Sharpy is learning. When he’s mastered the ability to strike quickly and silently, he might come for you.